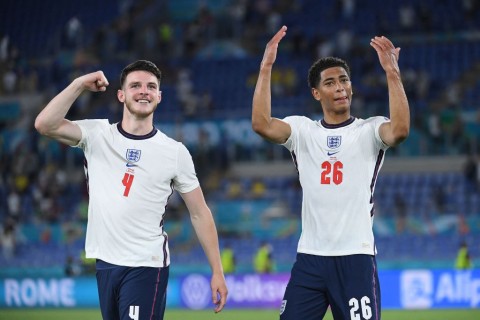 Carragher warned the pair off a big money move to United, writing in his column for The Telegraph: ‘It is hard to think of any United purchase of the last nine years who has improved since arriving at Old Trafford.

‘Even those who made an encouraging start have gone backwards.

‘When Harry Maguire, Luke Shaw, Aaron Wan-Bissaka and Jadon Sancho joined United, there was a sense the club was going in the right direction with young English talent. Now they look terrified to play at Old Trafford.

‘If I was Declan Rice or Jude Bellingham observing their England team-mates’ troubles – unless my motivation was a big payday – I would run a mile if United called.’

Meanwhile, the appointment of Ajax boss Ten Hag has given supporters hope for the future, but Carragher believes that the 52-year-old will still prove no match for the Premier League’s current crop of elite managers.

‘No matter how good Ten Hag is or proves to be, he must take on and beat the best coaches in the world. That is tough enough without having to start afresh with a squad overhaul.

‘For all the excitement at another United rebuild, the reality is none of those currently occupying the top four would swap their coach for Ten Hag.’

Rangnick predicts what could happen with Man United team next season