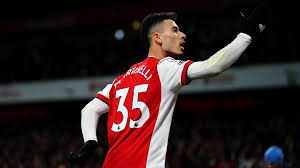 Gabriel Martinelli has disclosed that he wants to end his football career with Arsenal.

The Brazilian, who is enjoying his most consistent run in the starting lineup, has a contract which stretches until the end of the 2023/24 season.

“We have a young group, we have a lot of time ahead of us, players with a lot of quality, I think we will achieve great things,” Martinelli told ESPN Brasil.

“We always want more. Of course, Arsenal are a giant team. If I can, I’ll stay here my whole life. I want to conquer things, as I said, I want to stay here and win titles, with these wonderful fans, my teammates.”

Martinelli has admitted that the step up from minnows Ituano was a massive one – paying tribute to former teammate Emi Martinez, now with Aston Villa, in helping him settle.

“It was a giant leap for me. I was at Ituano, I lived in Itu, and I came to play at Arsenal, living in London,” he explained. “It was a little complicated, but my family was always with me, they always helped me at all times, off and on the field as well. At the club, I always had the support of Emi too.

“He helped a lot, he always helped me. His wife speaks Portuguese, so does he. He was very important to me, he helped me adapt to the club, to the country.

“With my family here, it became a little easier. But it was a big leap, it was just a bit of a good one.”

Related Topics:Gabriel Martinelli
Up Next