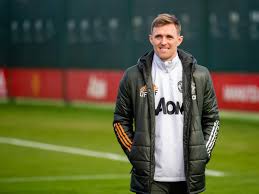 Darren Fletcher, a former player has expained his role at Manchester United to a fans forum.

Fletcher who officially the club’s technical director, has been very visible alongside interim manager Ralf Rangnick on matchdays, and almost mistaken as assistant manager.

“With Ralf and his staff coming in, and Michael (Carrick and Kieran (McKenna) choosing to move on, we had a quick transition process, so part of my role has been to assist with that, both on the training pitch and during games,” he said.

“I guess that’s been the most visible part for me this season, but that’s really an addition to my overall Technical Director role.

“Probably the key part of the role is taking a holistic view of the path for players from our Academy to our First Team. That pipeline of Academy talent is a massive part of who we are as a club.”

As part of his efforts at the club, he’s taking a deep look at their loan policy.

“All of them are doing really well on loan and we’re excited to bring them back in preseason to see how they fare with our first team players,” he said.

“It’s been a brilliant experience since I took on the role, and the combination of long-term planning and contributing to our strategic goals, with the opportunity to still be close to the team and management, makes it a unique role.”

Related Topics:Darren Fletcher
Up Next

What Richard Arnold said in his first address as Chief Executive