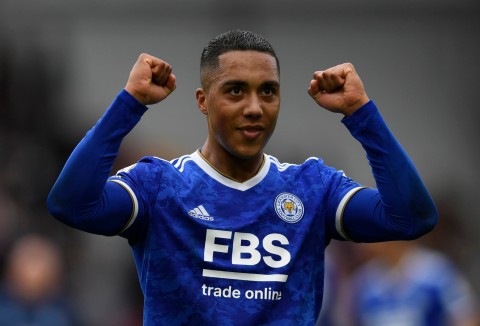 He is a major target for Arsenal and also on the list for Manchester United this summer, according to reports in Belgium.

According to Het Nieuwsblad, Tielemans is now preparing to leave Leicester this summer for a ‘top club with title ambitions’.

The report claims that Leicester had demanded £60 million for Tielemans last year but the Foxes would be willing to accept a £35m fee this summer, rather than let him leave on a free transfer in 2023.

Speaking last month, Brendan Rodgers admitted that Tielemans could be in his final season with Leicester.

‘He is at an age and at a stage in his contract where he has to ensure he looks at every option. I would love it to be here at Leicester, that is natural, but I understand it’s a very short career,’ said Rodgers.

‘For players it’s about ambition, the challenge and sometimes it’s about a different environment. We have seen it before many times.

‘Teams have won the Champions League and the player will move on. That’s the nature of it. For me, I can only worry about keeping improving him as a player, keeping him focused and letting everything else be taken care of.

‘We have a close relationship, it’s really strong. I made a commitment to him when I first came in that we would improve him as a player and he believes in the environment.

‘Once the player is committed, focused and professional it’s never a worry for me. With Youri you can see his joy of being here, he loves being here and you have to respect these guys’ careers are short.’

Related Topics:Youri Tielemans
Up Next